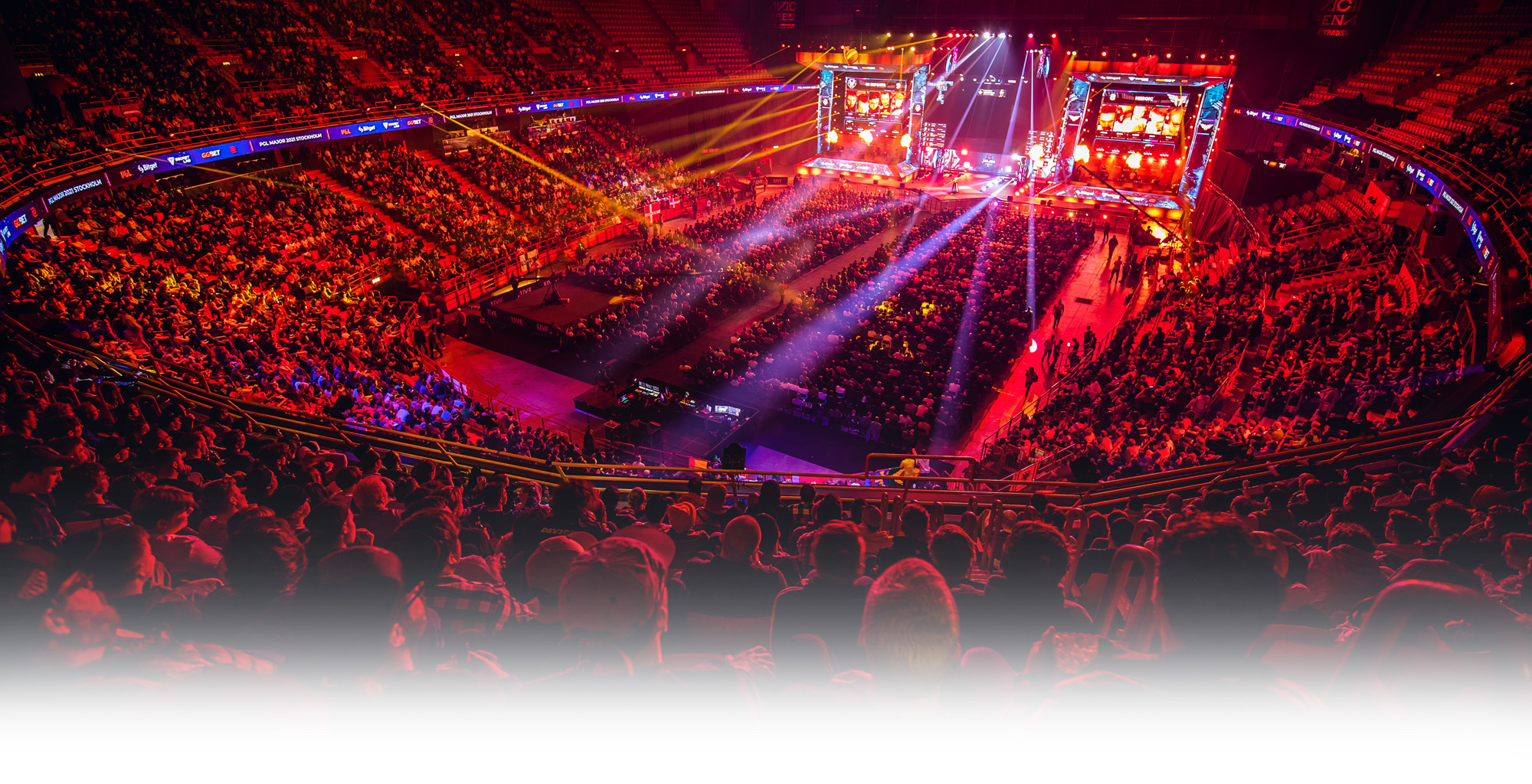 The goal of the Major is to bring together the best Counter-Strike players in the world to a LAN setting, provide them an opportunity to claim their title, and to demonstrate to millions of CS:GO players around the world just how high the Counter-Strike skill ceiling is.

The Major represents the pinnacle of Counter-Strike skill and provides an open invitation for the best in the world to participate regardless of their means or access.

Historically, the rules and requirements for Majors have been communicated publicly through different channels or to partners privately. By consolidating them into a single document, we hope to eliminate inconsistencies across Valve-sponsored events and allow tournament operators to prepare their staff well in advance of their events.

This document does not contain all of the rules of the tournament; only the ones we require to be uniform across all Major events. For the complete body of tournament rules for your event, contact the tournament organizer.

If you would like to contact the CS:GO team with questions or comments, feel free to send an email to csgoteamfeedback [at] valvesoftware.com, with the subject #MajorsRule.

What is expected of tournament organizers with respect to this document.

The Tournament Organizer (“TO”) will include this document in its tournament rules. Event admins are expected to be familiar with the contents. Any conflict between these and other tournament rules are to be resolved prior to the publication of the event rules.

These are the main deliverables outlined in this document that are required of the TO, along with their due date (relative to the start of the event).

Rules and procedures for determining who is to participate in the events.

Major invites are sent to the teams of five players who earned an invitation from the most recent RMR. If a team used a substitute, an invitation is extended to the five who played in the last match they won.

A team cannot adjust their roster between the RMR and the Major. However, they can register a different coach or substitute player.

RMR invites are sent to teams of three or more players who played together in the Legends Stage of the previous Major. If a team used a substitute, the five players that are considered to have “played together” are the five who played in the last match they won.

Separating world-wide competition into regions that allow players to compete with low latency is important to measure skill on a level playing field.

Regional Major Ranking events (RMRs) sort teams within their region, and the top teams from each region receive Major invitations.

RMR regions roughly correspond to their geographic equivalent. On the edges, countries should be assigned to the region that provides teams the lowest latency in qualifiers.

The 3 RMR regions are

In the event that the RMRs must be held online, there will be 5 RMR regions

A team’s region is determined by the citizenship of the majority of its players. In case of a tie, the team chooses between the two.

The number of teams invited from each region depends on the performance of that region in the preceding Major. Legends and Challengers invitations are allocated according to the number of teams from the region that earned their respective position in the Major:

Teams that earn an invitation for their region (i.e., top 16 teams from the Major) are given a chance to defend their regional invitation at the following RMR. If a team is able to–and opts to–play in a different region, their previous region loses an invitation and their new region gains an invitation. In other words, teams that change regions take their invites with them.

Note that for the purposes of RMR, regions represented by more than 8 teams will be subdivided into groups of 8 or less, so that each group can be resolved with one of the available RMR formats.

Invitations will be sent to intact teams, per the invitation requirements above.

If a team declines an invitation, or is no longer intact, the next-highest ranked team receives their invitation. If there are no additional teams available then the remaining slots are to be determined by a last-chance regional qualifier.

The TO needs to collect the following of all registered participants and deliver them to Valve (Excel or CSV).

The TO must inform participants that this information will be transferred to Valve.

Team names and logos are to be registered and represented as they are commonly seen in their own media and in third party esports media.

If there are multiple teams whose commonly known names share the same title sponsors, only one of them may use the title sponsor at the event.

Players and teams are required to accept the following agreement (verbatim) in order to participate in the event. The TO will distribute (physically or digitally) and collect signatures or equivalent from all registered participants and team representatives and deliver them to Valve. The acceptance must be legally binding (e.g., valid signatures).

The TO is to collect any Disclosures of Conflicts of Interest that result from registration and make them publicly available.

The TO needs to provide Valve with player avatar images for all participating players.

The TO will not qualify, nor allow in any qualifying event, any player who has been “Valve Anti-Cheat” banned (“VAC Banned”) in CS:GO. Any player who is VAC Banned on any of their accounts must be approved in writing by Valve in order to be eligible to participate in the event. Any team on which a banned player has played during the period starting with the first qualifier and ending with the end of the event, will be banned (“Banned Team”). Valve also reserves the right to disqualify any player, team, broadcaster, commentator or producer in its sole discretion. The TO will immediately disqualify such person or team upon notice from Valve.
Any event winnings by such player or such Banned Team will be forfeit. No player from a Banned Team will be eligible to compete in the event with any other team.

Individuals (including coaches) that are prohibited from participation in the event are not to be employed or partnered with the TO for the event (including streaming partners). Nor are they to have access to team/staff-only areas.

Rules, procedures, and definitions that pertain to the format and structure of the competition.

The RMR format for a region is determined by the number of slots for that region. All teams not directly invited due to RMR position are to qualify in through open qualifiers. The formats are as follows:

In order to ensure that the resulting groups are as similar in strength as possible, the highest and lowest ranked invitation slots are paired and placed into a group, and this process continues for each subsequent group.

E.g., given 16 EUR regional slots, pair slots according to the rule above and split into two groups:

The resulting groups are:

Within each RMR, the highest-ranked invited teams are paired with the lowest-ranked qualifying teams.

E.g., In opening matches, the top-ranked EUR1 team would be paired with the lowest-ranked qualifying opponent.

All Major and RMR events are to use the following map pick-ban process for determining which map (bo1) or maps (bo3) are played.

Coming into the event, all 24 teams are seeded based on the Next Major Slot from the prior Major.

For all Swiss matchups (e.g., the Challengers and Legends stage, and Swiss RMR formats), after the initial matches, seed is determined (in order) by:

Each team’s Difficulty Score is tracked for the purpose of tie-breaking.

Therefore, if both Team A and B have the same win-loss record, Team A gets the higher seed because it played against teams that were more difficult to defeat.

Requirements that pertain to the technical setup, configuration, and execution of the RMRs and Majors.

The TO is to use the up-to-date in-game versions of the maps in the Active Duty Map Group.

Players can have workshop maps on their competition machines provided that

Competition PCs are to have no internet access aside from what is minimally required to log in to Steam and CS:GO and run the game.

Competition PCs are to be secured and managed by event staff and restricted down to what is minimally required to log in and run the game.

Setting up auditing rules should be done on player machines so if a player is called into question there are records of actions taken on the machine. It should be noted that on some hardware this could potentially cause performance issues so once auditing rules have been set the machines should be tested and benchmarked to ensure that the game will still run smoothly.

Clients should have the following convars set as such:

All server convars are to be set to competitive defaults (cfg/gamemode_competitive.cfg) except for the following exceptions.

Servers must be configured to submit logs in order for the match results to present in the client to all users.

Below is a step-by-step test to confirm that GOTV and caster camera/audio are working correctly.

Rules and procedures that pertain to the active administration of the tournaments.

Each team can substitute a player with their registered substitute once during the event.

The TO will prevent players from bringing any electronics (e.g., pagers, cell phones, etc.) aside from permitted gaming peripherals (mouse, keyboard, etc) to the competition area by employing a metal detector security detail at the entrance.

Any other items players wish to bring on stage must be inspected by the TO staff.

Aside from the TO staff, only the five players and the team’s pre-registered coach are permitted in the competition area during event matches.

Coaches are not to communicate with (i.e., be seen, heard, or felt by) the players by any means at any time with the exception of warmup, half-time, and tactical timeouts.

Coaches that wish to call a timeout are to do so by notifying an admin.

In the case of any matches where event admins are not physically present (e.g. online matches), no team staff, including the coach, may be physically or virtually present or communicate with the players at any time during the match.

Servers must be configured to submit logs and data is to be entered for each match.

Return to the Control Room and click the SAVE FINAL SCORE button. This will close out the match in the game for all users and allow them to claim souvenirs.

Obligations that pertain to the completion of the tournaments.

Final Major Rankings are determined by (in order)

Final RMR Rankings for Swiss Formats are determined by (in order)

Final RMR Rankings for all other formats are determined by final placements.

The final standings for each RMR must be delivered to Valve upon completion of the event.